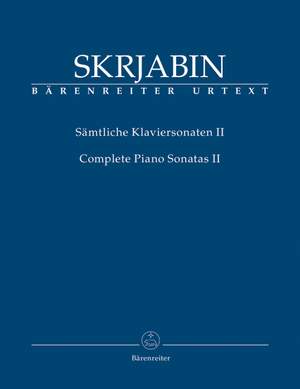 Piano works were at the centre of Alexander Skrjabin's compositional output. As an outstanding pianist, he began writing mainly miniatures for his instrument in the style of Romantic piano pieces.

But it was also Skrjabin who, unlike any other composer of his generation, contributed to the continuation of the sonata tradition. Particular milestones in his output were Sonatas nos. 4 and 5 of 1903 and 1907, in which we hear forms and harmonies not heard previously.

When these works are occasionally given the name " Poème " Sonatas, this indicates that they stem from the time and allude to the compositional context of Skrjabin's daring orchestral works ' Le Divin Poème ' and ' Le Poème de l´exstase ' .

The editor Christoph Flamm is an expert in Russian music, particularly piano music. His research, for example, into Nikolai Medtner and the editions based on these findings are regarded as standard works. For his Bärenreiter edition of Skrjabin's Sonata no. 5, Christoph Flamm has drawn on sources which were until recently regarded as lost or could only be consulted with great difficulty.

Skrjabin's Complete Piano Sonatas will be published in 4 volumes.


"Christopher Flamm's edition is much more than a re-working of the first edition. A landmark issue."
(International Piano, Mai/ Juni 2010)

"...these remarkable and pioneering works, now nearly a century old, receive a splendid editorial makeover, ushered in by a Forword from Marc-André Hamelin, no less, and a quote from Boris Pasternak, even less less."
(Music Teacher, May 2010)