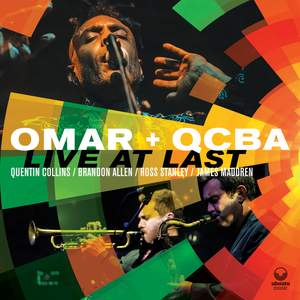 This eight-track album, commissioned by Ubuntu label boss Martin Hummel and recorded at the Jazz Café in London in May 2021, deftly captures the essence of both acts – the falsetto-to-baritone... — Jazzwise, March 2022, 4 out of 5 stars More…

Ahead of a gig at the London Jazz Cafe, we spoke to neo-soul vocalist Omar Lye-Fook and trumpeter Quentin Collins on their latest collaborative record - the electrifying and funky Live at Last - as well as getting back into the swing of live music, and what they're up to later this year.

Ubuntu Music is delighted to announce the signing of sensational soul vocalist Omar + QCBA for the release of their upcoming live album, which is being recorded at their two sold out shows at London’s Jazz Café on Friday, 29th May.

Omar Lye-Fook MBE is, without a doubt, one of the greatest soul music talents the United Kingdom has produced in the last 40 years. If anyone has doubts about that, then they should consider the list of legendary artists who happily line up to collaborate with him musically, or simply sing his praises – from Stevie Wonder, the late Leon Ware, Erykah Badu, Common, through to Carleen Anderson, D’Angelo, and Soul II Soul’s Caron Wheeler, Angie Stone and UK artists Courtney Pine, Rodney P, Kele LeRoc, Natasha Watts and Estelle, who all appreciate his truly original and unique voice, his musicianship and his song writing talent.

Omar teams up with his decade-long partnership of QCBA, featuring the outstanding trumpet player Quentin Collins and the tenor sax titan Brandon Allen, for an intoxicating musical cocktail of jazz, R&B, funk and soul. QCBA are an organ driven quartet of virtuosos known for their smart, sassy, contemporary and original music. Influenced by the great Blue Note era of the 60s, they’ve taken the jazz scene by storm with their eclectic collaborations.

When QCBA team up with Omar, they deliver an explosion of soul-funk infused music. Rounding out the band are two absolutely exceptional talents: Ross Stanley, arguably the best Hammond organist in the country, and James Maddren, certainly one of the most sought-after drummers in jazz today.

This eight-track album, commissioned by Ubuntu label boss Martin Hummel and recorded at the Jazz Café in London in May 2021, deftly captures the essence of both acts – the falsetto-to-baritone range of Omar’s voice, QCBA’s 1960s and 70s-era Blue Note influences – along with all the excitement of a live gig straight out of lockdown.