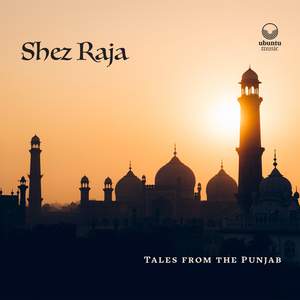 New, Tales From the Punjab

Throughout, stories are told in ways ancient, modern, spiritual and sustaining. Not for nothing is the closer called ‘Enlightenment.’ — Jazzwise, April 2021, 4 out of 5 stars More…

Recording of the Week,  Shez Raja - Tales from the Punjab

Master bassist Shez Raja travels to the Indian sub-continent to rediscover his roots and engineer a brilliant meeting between eastern and western schools of improvisation.

Shez is famed for his high energy live shows, unique Indojazzfunk sound and global jazz star collaborations with Mike Stern, Randy Brecker, Trilok Gurtu and Wayne Krantz. In addition, Shez was recently voted one of the top 30 'Hottest Bass Players in the World' by readers of Bass Guitar and Bass Player magazines.Shez was born to an Asian father and English mother, on the Wirral, in the North-West of England. Classically trained on the violin from the age of 9, a few years later he traded the instrument for electric bass and hasn't looked back since.Educated at Leeds College of Music, Raja toured the UK with groups such as Elephant Talk and Loka before becoming a highly sought-after session musician.In his formative years, Shez went on trips to the Punjab region of the Indian sub-continent with his father and explored the music of his roots, learning tabla drumming.A regular at top UK venues including Ronnie Scott's and the Jazz Cafe as well as major international jazz festivals from Russia to New Zealand, Shez and his band have amassed a devoted following and forged a reputation as one of the most entertaining live acts on the scene today.Shez's mission as an artist is to be authentic with his emotions, develop his own unique voice and to explore the language of music to become fully self-expressed. He explains, "I believe the ultimate goal for a musician is to make music that is raw, real and from the heart, that moves and inspires people".For his album, Tales from the Punjab, Shez digs deep into his rich South Asian heritage to create his most exquisite and heartfelt recording to date. He describes:"In early 2020 I went on an adventure, travelling around the Punjab to explore my South Asian identity and immerse myself in the musical culture of my roots. Little did I know, the world was about to change and I feel very lucky to have had what was to be a magical and truly enlightening experience."Whilst in the vibrant city of Lahore I was honoured to collaborate with some of the most accomplished m

Throughout, stories are told in ways ancient, modern, spiritual and sustaining. Not for nothing is the closer called ‘Enlightenment.’

This is certainly a record that deserves a few listens to let it seep into the consciousness, as each time I returned it revealed new facets.