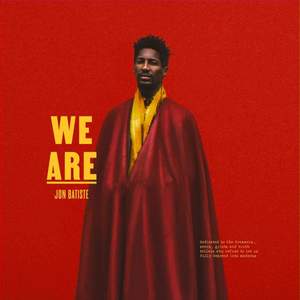 Using the best of the past to build toward a better tomorrow is a stirring notion that pervades the album, both musically and thematically. He draws upon the vigorous grooves of New Orleans funk... — AllMusic, 4 and a half out of 5 stars More…

WE ARE is a masterfully constructed and visionary album that represents a completely new sonic chapter for Jon Batiste and a new direction for music culture as a whole. Writing, travelling, painting - all while inviting some of the most esteemed creative minds to assist in birthing the album - he reached the finish line smack in the middle of the first wave of the worldwide pandemic and volatile social unrest. At the end, a masterpiece of Black Pop Music characterized by the consciousness of Marvin Gaye, the grounded optimism of Stevie Wonder, the iconoclasm of Thelonious Monk and the swagger of Mannie Fresh was born.

On March 19th, 2021, Jon will present a captivating musical experience to the world rooted in catharsis, joy, freedom, contemplation and sensuality. It’s a love letter to his southern roots and the heritage of Black Music with guest appearances by Mavis Staples, Quincy Jones, Zadie Smith, PJ Morton, Trombone Shorty, St Augustine Marching 100, his father Michael Batiste, grandfather David Gauthier and many more. It is a meditation steeped in the sounds of the times with collaborators including POMO (Anderson.Paak), Ricky Reed (Lizzo), Jahaan Sweet (Drake, Eminem) and others.

“I'm publicly known for some things already,” says Batiste. “But there's so much more to know about me. It’s always been there. Now is the time to show the world my full artistry.”

WE ARE is a message of love for humanity, of humble reverence for our past, and of a hopeful future, in which we are the ones who can save us. Jon said “The art reveals it’s motive to you. You just have to wait for the Spirit to tell you what it wants.

Using the best of the past to build toward a better tomorrow is a stirring notion that pervades the album, both musically and thematically. He draws upon the vigorous grooves of New Orleans funk pioneers the Meters with "Tell the Truth" and crafts a buoyant, psychedelic-soul vibe with the help of author Zadie Smith on "Show Me the Way."

“Epic” has become an empty cliché, but its classical meaning—a sweeping poem containing history—applies nicely to multi-instrumentalist and vocalist Jon Batiste’s new album, We Are. Declaring personal and social affirmation across Saturday night frolics and Sunday morning prayers, it serves as a welcome vaccination against the virus of despair. Though its reach sometimes exceeds its grasp, it is inspiring and often heartbreakingly beautiful.