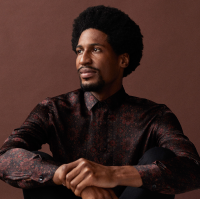 Jonathan Michael Batiste is an American musician, bandleader, and television personality. He has recorded and performed with artists in various genres of music (Stevie Wonder, Prince, Willie Nelson, Lenny Kravitz, Ed Sheeran, Roy Hargrove, and Mavis Staples), released his own recordings, and performed in more than 40 countries. Batiste regularly tours with his band Stay Human, and appears with them nightly as bandleader and musical director on The Late Show with Stephen Colbert since 2015.

Batiste also serves as the Music Director of The Atlantic and the Creative Director of the National Jazz Museum in Harlem.

Recording of the Week,  Jon Batiste - Anatomy of Angels

Anyone who has seen 'The Late Show' will recognise Jon Batiste, but there is much more to him than being Stephen Colbert's musical side-kick, as he proves on the engrossing live set from New York's Village Vanguard.