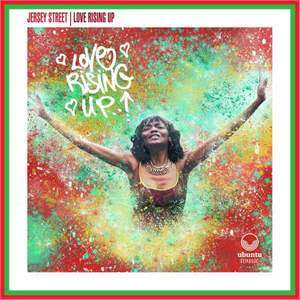 Dawn Zee, Matt Steele, Neil Reid: No One Can Take Your Place

Recording of the Week,  Jersey Street - Love Rising Up

Get your dancing shoes on for an irresistible slice of Brit Funk from Manchester's Jersey Street, featuring the smooth vocals of Dawn Zee.

Ubuntu Music is excited to announce the signing of Jersey Street for the worldwide release of their long-awaited album, 'Love Rising Up', on 25th September 2020.Jersey Street's heady combo of Deep House, Spiritual jazz, Latin rhythms and raw soul saw them embraced by audiences all around the world when they first appeared on the scene. The band features 'Manchester's best kept secret', vocalist Dawn Zee, who has been compared with the likes of Erykah Badu, Jill Scott and Lauren Hill. Previously, Jersey Street released two highly respected albums and a series of singles that were equally at home on the dancefloors of clubs such as Giant Step and Paradise Garage, as they were in the playlists of jazz and soul DJs. This saw the band release tracks on such legendary underground labels as Junior, Electric Chair, Defected, Hed Kandi, Naked and Yellow as well as touring throughout Europe as a powerful nine-piece live outfit. Now, in 2020, Jersey Street is back with a brand new album, 'Love Rising Up', that returns to their original jazz roots and steps away from the dance floor to draw the dots between the influences of Roy Ayers, Rotary Connection and Betty Davis to the more contemporary stylings of Anderson Paak and Floating Points, while stopping off for a drink with Nu-Yorican Soul along the way. The album is characterised by lush string and brass orchestration, some world-class musicianship, and an irreverent Manchester attitude, with the band's classic song writing chops always at the forefront. According to co-founder Dawn Zee, "We began this process a couple of years ago as something very pure, based on the desire to make the record that we'd always wanted to, musically and sonically, without any reference to anything apart from our own taste. It ended up sounding better than we could have imagined, probably because of that very approach. It's heavily song-based and draws on a wide range of influences. We've got some wonderful musicians on the album and we wanted to give all the players the freedom to