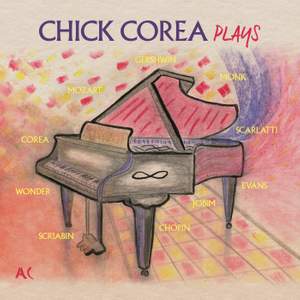 His studied informality, humour and ease with his audience makes for a totally absorbing listening experience that is part recital, part master class and part informal get together in his front... — Jazzwise, October 2020, 4 out of 5 stars More…

Chick Corea brings a lifetime of musical influences, and elements of game playing, to these brilliant live recordings, with the audience very much part of the act.

The latest addition to Chick Corea's remarkable discography is 'Plays', a captivating and intimate double album of solo performances. While he claims that, "Solo piano is lonely," Chick finds himself in good company throughout these stellar performances, engaging with several of his favorite composers.

The list of icons represents a wide swath of musical history, from the classical repertoire of Mozart and Chopin to formative jazz influences like Thelonious Monk and Bill Evans, on to the Great American Songbook classics, the bossa nova beauty of Jobim, and the modern pop sensibility of Stevie Wonder.

With countless classics having become standards over the last half century, Corea himself deserves to take his place in that pantheon, and 'Plays' includes a number of pieces - reprised from past albums or spontaneously improvised - from his own estimable songbook. The album also showcases his charming rapport with enthusiastic audiences in concert halls across Europe and the U.S., who become integral collaborators in these spirited renditions.

His studied informality, humour and ease with his audience makes for a totally absorbing listening experience that is part recital, part master class and part informal get together in his front room. He elides Mozart into Gershwin, Scarlatti into Kern, touches base with a couple of his favourite standards, explores Monk, doffs his cap to Stevie Wonder…

...it’s about being in the moment, and alive with the music. But as the breadth of Plays suggests, Corea is democratizing the music, according show tunes and classical music the same treatment he offers bebop and pop.

This delightful album of solo piano performances by Chick Corea collects together highlights from recent concerts at various venues across the globe. The title Plays has a double meaning, hinting towards the general air of care-free whimsicality that informs much of the solo music he makes in concert, and the tremendous rapport he has with his devoted followers.