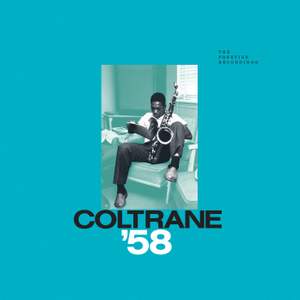 Coltrane: I Want To Talk About You

Kern: Why Was I Born? (from Sweet Adeline)

Howard Dietz, Arthur Schwartz: I See Your Face Before Me

Howard Dietz, Arthur Schwartz: If There Is Someone Lovelier Than You

Coltrane: By The Numbers

Sigmund Romberg, Oscar Hammerstein II: Lover Come Back To Me

Henry Nemo: Don't Take Your Love From Me

Fred Ahlert, Roy Turk: I'll Get By (As Long As I Have You)

Rodgers, R: Do I love you because you're beautiful

E.Y. Harburg, Arthur Schwartz: Then I’ll Be Tired Of You

John Coltrane (1926-1967) departed this mortal plane more than fifty years ago; today he remains among us, more alive than ever. His sound continues to grab the ears of an ever-widening circle of fans. His legend is stone solid: planted firmly in our culture as that of any 20th century musical giant. His saxophone sound—brooding, searching, dark—is still one of the most recognizable in modern jazz. His influence stretches over styles and genres, and transcends cultural boundaries. Coltrane’s career was relatively short (launched his solo career in 1960), but he recorded prolifically. Working in the bebop and hard bop idioms early in his career, Coltrane helped pioneer the use of modes and was later at the forefront of free jazz. He led at least fifty recording sessions, and appeared on many albums by other musicians, including trumpeter Miles Davis and pianist Thelonious Monk. He recorded for Prestige, Blue Note, Atlantic and Impulse! record labels, before his passing in 1967 at age 40. He received many posthumous awards and recognitions, including canonization by the African Orthodox Church, and a special Pulitzer Prize in 2007.

In 1958, Coltrane was a relatively new arrival in New York City and still primarily a sideman. Yet he was already a saxophonist of consequence, contracted to make recordings as a leader for the small independent jazz label Prestige Records. He possessed a tone and favored phrasing that made for an instantly recognizable sound, one that did not shy from extremes: it could be impassioned and strained, urgent to an unsettled degree. Alternatively, it was languid and brooding, almost melancholy.

The duration of time covered on COLTRANE ’58 may be one calendar year, but the rate at which Coltrane’s musical abilities grew—as well as his fanbase—is remarkable. Twelve months of constant push and progress—gaining an ever-widening audience. It says a lot that he was often called on to participate on recordings by “The Prestige All-Stars,” or similar projects like Tenor Conclave or The Cats. It says more that soon these sessions were reissued with Coltrane’s name on the cover as if he had been the leader.

COLTRANE ’58 features all the music Coltrane recorded that year as a leader or co-leader for Prestige. These 37 tracks serve an inspiring listening session revealing all aspects of Coltrane’s approach that year: his talent at recasting decades-old themes with a modern touch. A penchant for brooding, minor-key melodies. An increased ability to toss together timeless performances born in the one-take fire of three-hour recording dates.

This collection also shows Coltrane in the company of his first-call lineup at the time, favoring fellow members of Miles’ band at the time: Red Garland, whose gutsy elegance on piano comes through in sophisticated voicings and rich block chords, and a special touch on the blues. Paul Chambers’ bass both anchors and swings—reliably, no matter the tempo—and there’s that deep hum of his pliant, bowed solos. Art Taylor’s drumming provides crisp explosions and a taste for drama, and Jimmy Cobb’s is all about a steady, comfortable groove. Donald Byrd’s expressive phrasing, his fluid trumpet vocabulary and the raw edge in his sound that works well alongside Coltrane’s taste for texture. Newcomer trumpeters at the time, Wilbur Harden and Freddie Hubbard can also be heard on the later recordings.

1958 was sixty years ago. Today, Coltrane’s faith in universalism might seem wishful or even naive in a time when lines are again extreme, when taking action or even taking a knee faces fierce, violent reaction. Coltrane had to deal with context, too. The late ’50s had their share of racial tension, violence, and a pervasive hopelessness. Marches, speeches, riots and assassinations were soon to come, and heightened confrontation to follow: Black Power. Black Panthers. More assassinations. In the context of current headlines and an overriding sense of déjà vu, Coltrane’s music rings clearer than ever, with even greater meaning than it had in 1958. What he was playing then never felt less than urgent and relevant—subversive even.