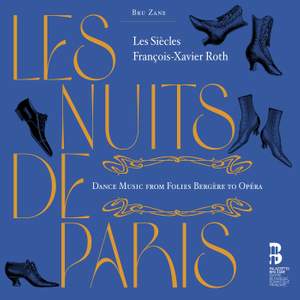 Beautifully recorded and with Bru Zane’s customary excellent booklet notes, this is a disc to delight Francophiles, especially sweet-toothed ones like myself. — Gramophone Magazine, February 2023 More…

The dance permeated every layer of Romantic society. From popular dance halls to courtly salons, people showed their public face, enjoyed themselves and met one another in waltz time or to the rhythms of the quadrille or the polka. At the same time, ballet gained unprecedented fame on the stage of the Paris Opéra. The music that accompanied this frantic round in France has long been neglected, whereas the Viennese have never ceased to celebrate their waltzes. Under the expert baton of François-Xavier Roth, the orchestra Les Siècles has set out to rediscover this French repertory using historical instruments. Their album explores the output of both established composers – Camille Saint-Saëns, Ambroise Thomas, Charles Gounod, Jules Massenet – and their colleagues who specialised in Terpsichorean entertainment, including Philippe Musard, Isaac Strauss, Émile Waldteufel and Hervé.

Beautifully recorded and with Bru Zane’s customary excellent booklet notes, this is a disc to delight Francophiles, especially sweet-toothed ones like myself.

It’s all very French, and presented with great flair and warmth by Roth and his orchestra.