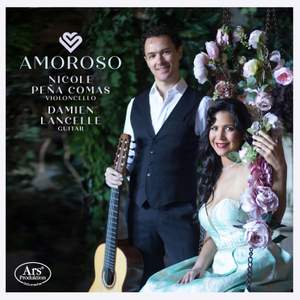 One can hardly imagine a more heart-warming sound than the soft voice of a cello accompanied by the sweet tones of a Spanish guitar.

In fact, these two instruments combine in such an amorous way that Nicole Pena Comas and Damien Lancelle decided they required a whole album to express the different facets of love: passionate, tender or playful, the burning desire of new lovers and the selfless care for friends and family. Masterpieces by great composers such as Tchaikovsky, Liszt or Schumann as well as gems by forgotten names such as August Nolck or Amy Beach, all express love and closeness and were selected and arranged for cello and guitar for that very reason.

The Dominican Cellist Nicole Pena Comas based in Vienna, who dazzles with her rich, warm, beautiful and cantabile sound, holds a bachelor and master's degree with distinction from the University of Music and Performing Arts of Vienna, which she completed under the guidance of Wolfgang Aichinger. She has performed as a soloist with the Orchestra di Roma, Orquesta Sinfnica Nacional of the Dominican Republic, Concentus 21 in Austria and the Juan Pablo Duarte Orchestra of the Conservatorio Nacional de Msica in Santo Domingo, Dom. Rep. Her first album "El canto del cisne negro", with the Chilean pianist Hugo Llanos Campos, was released on November 2020 by Ars Produktion.

Damien Lancelle earned a Masters degree from the University for Music and Performing Arts under the guidance of Brigitte Zaczek in 2015, and has been awarded prizes in over 10 international guitar competitions. He is regularly invited to perform in the most renowned venues such as the Moscow International House of Music, the Musikverein and the Konzerthaus in Vienna or the Kiev Philharmonic Hall. As a Soloist, he has notably performed alongside the Orchestre Symphonique des Yvelines, the Franz Schmidt Kammerorchester Wien or the Kharkov Philharmonic Orchestra.