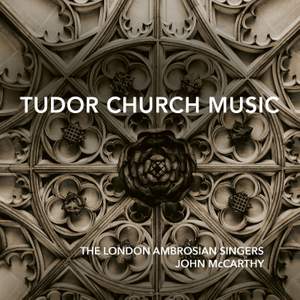 The Easter Liturgy of the Church of England

There’s a striking version of Taverner’s Benedictus in this album, and Gibbons’s own Benedictus is not far short in directness... McCarthy’s shaping of the music is impressive... The digital... — MusicWeb International, December 2022 More…

Gibbons, O: Awake up, my glory

Mundy, W: O Lord, the Maker of All Thing

Byrd: When Israel came out of Egypt

To be exact, we should include in the Tudor Church music only the period prior to 1549 and consider Robert Fayrfax (1464–1521) and Hugh Aston (died 1522) as the first Tudor composers. They were succeeded by a great master – John Taverner; only a small number of works with English texts in his hand are extant. Then came Thomas Tallis, who composed works for the reformed Church, but he left also compositions intended for the Catholic service. Peter Philips, another major figure, could not bring himself to accept the Reform and left England. William Byrd enjoyed such popularity that he was able to write music for the Catholic Church under the aegies of the liberal Elizabeth I without ever being bothered. With Orlando Gibbons the composers began to write more for the Church of England. Thomas Tomkins may be considered as the last of those composers coming under the heading “Tudor Church Music”.

There’s a striking version of Taverner’s Benedictus in this album, and Gibbons’s own Benedictus is not far short in directness... McCarthy’s shaping of the music is impressive... The digital remastering of Gerhard Schuler is excellent.