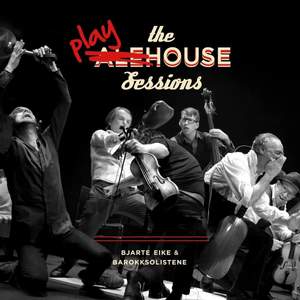 a performance that may not be authentic in a strict historical sense but feels absolutely authentic to the spirit of the period and of players – as then, and as now. — Gramophone Magazine, November 2022 More…

Purcell: Jenny Loves, and She Confessed Too (Arr. for String Ensemble by Bjarte Eike)

Eike: Over Hill, Over Dale

Purcell: Now the night is chac'd away (from The Fairy Queen, Z629)

Dowland: Can She Excuse Puck's Wrong

Violinist and music director Bjarte Eike talks about his new album and follow-up to the highly successful Alehouse Sessions, drawing further inspiration from the lively nightlife of Restoration England.

“There are some things you just can’t fake. The chemistry of a group is one of those - the sparks of musical energy that fly when certain artists collide. Bjarte Eike’s Barokksolistene is an alchemical miracle of an ensemble... pure musical gold” - Gramophone

Since the release of the chart topping ‘Alehouse Sessions’ in 2017, and a worldwide tour, Bjarte and the boys and girls have been busy on this new album which moves the alehouse project on from dour Puritanism of Cromwell’s Commonwealth, to the hedonistic Restoration of Charles II, and the Glorious Revolution that saw William III and Mary II replace the unpopular James II.

The alehouse musical culture developed into playhouses, and music halls, selling tickets and subscriptions. Operas, masques, dance, jesting (the first stand-up comedians maybe?), all this prepared the way for the first public concert hall to be established. Nights in these places though would still be bawdy - stage fights, cross dressing, elements of pantomime, songs sung to popular tunes of the day, satire - always a good draw, and a good number of rustic clowns, bawdy wenches and fools thrown in for good measure.

Think of these back rooms as a very English mix of Shakespeare, commedia dell arte, juggling with music by Purcell, folk tunes, and sea shanties. After the misery of the Commonwealth and Cromwell’s dictatorship, the public were in the mood to party. Playhouse is your invitation.

a performance that may not be authentic in a strict historical sense but feels absolutely authentic to the spirit of the period and of players – as then, and as now.

I adored the first instalment of baroque songs and dances with a spit-and-sawdust twist from these freewheeling Norwegian musicians, and its successor - focusing on the Restoration theatre rather than the tavern, though the atmosphere of boozy disinhibition remains - is no less intoxicating. Highlights include a rumbustious set of sea-shanties, some rollicking reels, and an aria from Dido and Aeneas as you've never heard it before - I'd love them to give the whole opera the same treatment…

The Playhouse Sessions, on Rubicon, again sees the violinist Bjarte Eike and his Barokksolistene ensemble recreating the anarchic atmosphere of after-hours musical sessions in Restoration pub backrooms...Berit Norbakken sings an understated version of Music for a While with bassist Johannes Lundberg that wouldn’t be out of place in a jazz club.