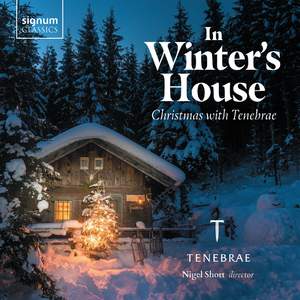 Vaughan Williams: The truth sent from above

Beamish: In the stillness

Parry, B: The Aldeburgh Carol

Tenebrae is regularly engaged with the world’s finest orchestras appearing regularly with the Academy of Ancient Music and Aurora Orchestra and has performed at major festivals and venues including the BBC Proms, Edinburgh International Festival, Leipzig Gewandhaus (Germany) and Melbourne Festival (Australia). ‘Passion and Precision’ are Tenebrae’s core values. Through its continued dedication to performance of the highest quality, Tenebrae’s vision is to deliver dramatic programming, flawless performances and unforgettable experiences, allowing audiences around the world to be moved by the power and intimacy of the human voice.