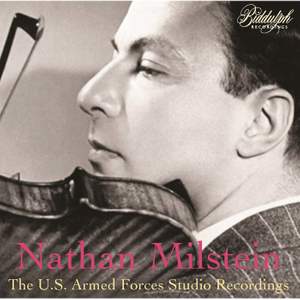 Flight of the Bumble Bee (Arr. for Violin & Piano )

Nathan Milstein is universally regarded as one of the greatest violinists of the 20th-century. A student of the famed Leopold Auer, Milstein stayed in Russia after the 1917 Revolution and only emigrated to the West in the mid-1920s. As well as solo concerts, Milstein performed in a piano trio with Horowitz and Piatigorsky. After settling in the West, he became established as a major musical artist, and he continued giving concerts into his mid 80s. This CD includes many items never before available commercially. Of special interest are the complete recordings Milstein made for the Basic Music Library on the Armed Forces label. This includes several works he never otherwise recorded, including the Brahms Violin Sonata No.2, and short pieces by Ravel and Wieniawski. Also featured on this CD release are Milsteins V-disc and Voice of America recordings, as well as the RCA album Violin Favorites featuring popular violin solo encores arranged for orchestral accompaniment by Leroy Anderson.