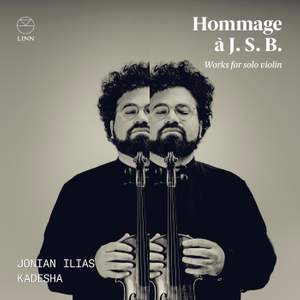 I. Dancing with Oneself

Linn is delighted to announce a new collaboration with violinist Jonian Ilias Kadesha. This highly distinctive musician has worked with leading artists and orchestras such as Chamber Orchestra of Europe, Scottish Chamber Orchestra, Nicolas Altstaedt, Steven Isserlis and Patricia Kopatchinskaja to name but a few. For his debut album on Linn, he has recorded a high-flying recital of solo violin pieces spanning five centuries. One of the oldest pieces of music written for solo violin, Biber’s angelic and absolutely mesmerising Passacaglia stands alongside Bach’s enduringly famous Second Partita, whose last movement is the starting point for the Ciaccona for Violin Solo by Swiss composer Helena Winkelman, which receives its first commercial recording here. Twentieth- and twenty-first-century works by Schnittke, Kurtág and Lera Auerbach, all heavily inspired by Bach’s music, complete the programme which augurs a fruitful partnership with a promising young talent.