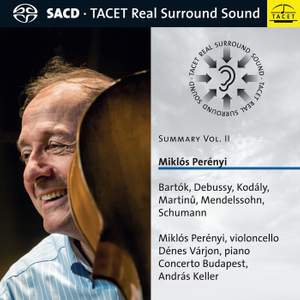 Martinů: Variations on a Slovak Theme for Cello & Piano, H. 378

Miklos Perenyi is recognised as one of the great cellists of his generation, with a distinctive, subtly nuanced sound matched by extraordinary musicality. This disc showcases his virtuosity through works by Bartok, Debussy, Kodaly, Martinu, Menselssohn and Schumann.

Born in Hungary, Miklos Perenyi began cello lessons at the age of five with Miklos Zsamboki, a student of David Popper. At the age of nine, he gave his first concert in Budapest and studied between 1960 and 1964 with Enrico Mainardi in Rome and with Ede Banda in Budapest. In 1963 he became a prize winner at the International Pablo Casals Cello Competition in Budapest. Casals invited him to his master classes in Puerto Rico in 1965 and 1966. Since then Mikls Perenyi became a frequent visitor to the Marlboro Festival. In 1974, Miklos Pernyi joined the faculty at the Franz Liszt Academy in Budapest, where he holds a professorship until today. He was honored with the Kossuth-Prize in 1980, with the Bartk-Psztory-Prize in 1987 and with the Hungarian "Artist of the Nation" Award in 2014.