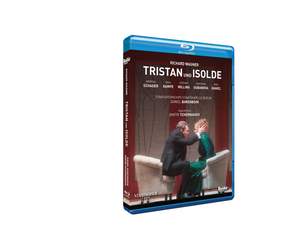 [Barenboim's] contribution is masterly, especially in terms of the impeccable balance and refinement of the orchestral playing and the steady momentum of his finely shaped interpretation, which... — BBC Music Magazine, August 2022, 3 out of 5 stars (Performance) / 4 out of 5 stars (Picutre and Sound) More…

f there is one work that has been crucial to Daniel Barenboim’s conducting career, it has to be Wagner’s Tristan und Isolde: he has been working on piercing its secrets for more than 35 years. In the pit of the newly renovated Staatsoper Berlin and at the head of his Staatskapelle, he once again makes magic happen.

Entrusted with the stage direction, Dmitri Tcherniakov delves into the psychological aspects of the drama and gives a new realistic depth to this opus. Thanks to his demanding direction of the cast, but also to a clever use of video projections, he manages to craft intense images which effectively resonate with the rapturous and voluptuous enchantments of the score.

To complete this high-level artistic crew, the Staatsoper called upon some of the finest Wagner experts: Andreas Schager, already a superb Parsifal and a regular guest at the Bayreuth Festival, is Tristan, Anja Kampe is an unforgettable Isolde, and Ekaterina Gubanova thrills as Brangäne.

[Barenboim's] contribution is masterly, especially in terms of the impeccable balance and refinement of the orchestral playing and the steady momentum of his finely shaped interpretation, which rises, when required, to the excitingly impetuous: nothing that one sees and hears on stage measures up to it.

This has always been a special score for Barenboim, who continues – in fact even more now – to conduct it with a Furtwängler-like fluency that sounds inevitable thanks to the great secret of never over-emphasising climaxes or motifs.