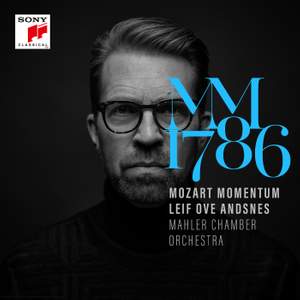 In 1786 the white-hot inspiration of Mozart’s work on his opera The Marriage of Figaro spilled over into the composer’s piano concertos and chamber music. Suddenly, Mozart’s music was filled with a new spirit of conversation, deeper layers of meaning, and fuller explorations of instrumental and human character. In these works, Mozart was looking far beyond the confines of public taste and writing, apparently, to satisfy himself.

For this recording, Andsnes has been reunited with his colleagues in the Mahler Chamber Orchestra – a team “you’d be hard-put to find … better matched,” raved The Guardian.

The Mozart Momentum project draws no distinction between forms of music – whether orchestral, chamber or even vocal – but all the pieces are united by the presence of the piano.

Mozart Momentum 1785 was named one of “The Best Classical Albums of 2021” by Gramophone and Andsnes’s performance of Piano Concerto no.22 was chosen as one of “The 25 Best Classical Music Tracks of 2021” by The New York Times. The release was also named “Album of the Week” by The Sunday Times and BBC Radio 3, and awarded a Diapason d’Or de l’année by France’s leading classical music magazine and Radio France.

Mozart Momentum 1786 is the hotly anticipated follow-up to one of 2021’s most popular and acclaimed albums. This is a release not to miss.