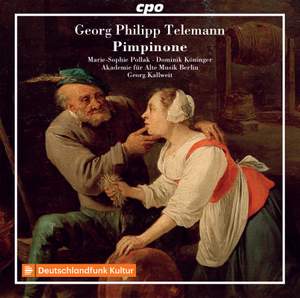 Georg Philipp Telemann’s intermezzo Pimpinone celebrated its premiere at the Gänsemarkt Opera in Hamburg on 27 September 1725 as an insert in George Frideric Handel’s opera seria Tamerlano and turned out to be a major public draw that continued to find its place in the Hamburg performance program until 1740. Telemann too valued this work and published it on his own in 1728. Apart from Telemann’s music, one reason for the success of this three-part intermezzo involved his pointed realistic look at the contemporary professional and private spheres. And each intermezzo offers us music fans today insights into existential worlds that only seemingly have disappeared over time: they tell of the hard life of single women, the significance of wealth and social standing for eligibility for marriage, the injustices of patriarchal marriage law, and the ridicule directed at romantically inclined senior citizens. In 1708 Tommaso Albinoni became the first composer to set the libretto Pimpinone e Vespetta by Pietro Pariati; in 1725 Telemann and his librettist Johann Philipp Praetorius lent the work a Hamburg touch. Italian arias were retained, but some arias, duets, and the recitatives were given new texts. Telemann proves to be – also in these scenes from a marriage – a master of musical depictions of moods, situations, and persons. Without exaggeration it may be said that this cpo new production with the Akademie für Alte Musik represents a benchmark recording.