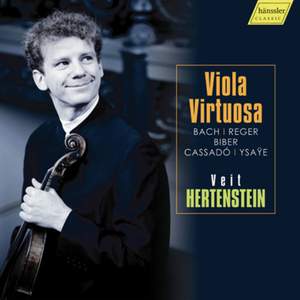 'The instrument's position, between the violin and the cello, offers us violists many opportunities to combine elements from both soundscapes and thereby to create something independent and new. This CD features a number of transcriptions - not derived from a desire to take something from someone else, but because I am absolutely convinced that good music can be played in a variety of ways as long as we remain true to the spirit in which the work was originally composed. Works by both Eugene-Auguste Ysaye and Gaspar Cassad6 appear on this CD, played for the first ti me on the viola. Ysaye has long fascinated me, and after featuring this work in a number of my concerts, it seemed perfectly natural to record his 4th Sonata. It was my former student Martin Moriarty who suggested the possibility of playing Cassado on the viola, when he turned up for a lesson one day with the score of this cello suite. I was enthusiastic from the word go because the suite sounds so good on the viola and I hope that the enthusiasm we felt during the recording session is palpable. Thank you, Martin, for this great idea!' Veit Hertenstein