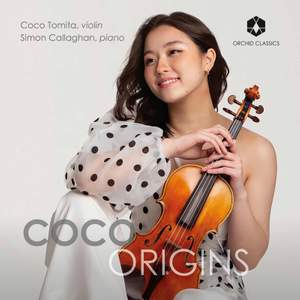 This is a fresh, consistently stimulating account of Ravel’s sonata, all the more effective for its avoidance of special pleading..[in the finale] Tomita and Callaghan hit a groove facilitating... — BBC Music Magazine, April 2022, 4 out of 5 stars (Performance) / 5 out of 5 stars (Recording) More…

The violinist talks about her debut album Origins, released tomorrow on Orchid Classics, and discusses her musical upbringing and influences.

"Winner of the Strings Final of the BBC Young Musician in 2020, Coco Tomita’s stunning debut album features a varied programme, including works by Enescu, Poulenc, Boulanger, Hubay, Ravel and Debussy. The choice of repertoire for her debut recording was entirely Tomita’s own: 'Having complete freedom over what I wanted to share with the world was amazing, and put simply, I love all the pieces I’ve chosen deeply. They’ve resonated with me over the years, and I found really interesting connections between every piece and composer. The programme also relates to key figures of the 20th century, especially female violinists I hugely respect.' Those violinists include Ginette Neveu, the driving force behind Poulenc’s Violin Sonata, and Jelly d’Aranyi – taught by Jenő Hubay, whose Carmen is one of the pieces on the album that Tomita played to such acclaim during the BBC Young Musician. She is particularly fascinated by the Poulenc and Ravel Sonatas, which are at the heart of the album: 'there’s just so much to explore and express.'"

This is a fresh, consistently stimulating account of Ravel’s sonata, all the more effective for its avoidance of special pleading..[in the finale] Tomita and Callaghan hit a groove facilitating both clean articulation and a gathering excitement…Overall, this is a richly promising recording debut.

I can well imagine that before long Coco Tomita will be celebrated among the best younger violinists and this superbly produced and engineered recording (thank you Andrew Keener and Oscar Torres) should prove an excellent calling card.

The playing, technically dazzling and characterful, bursts with musical intelligence, with the experienced Callaghan an expressive duo partner. The choice of repertoire, of her own devising, is a refreshing mix.