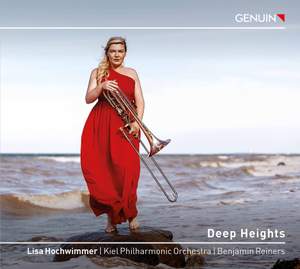 Bourgeois, D: Concerto for Bass Trombone and Band, Op. 239a

I. The Return of the Prince

II. Song of the Mountains

III. Dance of the Neocons

As Richard Wagner penned in 'Das Rheingold', 'Traulich und treu ist's nur in der Tiefe' (Tender and true 'tis but in the depths): This recording is a truly sensational debut full of dizzying depths, presented by the up-and-coming bass trombonist Lisa Hochwimmer on her debut GENUIN CD together with the Kiel Philharmonic Orchestra. The program features fascinating compositions for the lustrous golden low-pitched instrument, which is rarely heard as a solo instrument with an orchestra. Lisa Hochwimmer embarks on wide-ranging musical expeditions, taking on powerful original repertoire by Derek Bourgeois, Alexej Lebedev, and Chris Brubeck, as well as imaginative arrangements of opera arias by Peter Tchaikovsky, Giuseppe Verdi, and Richard Wagner. And with this smoothness and depth, some of Walhalla's gods are guaranteed to be green with envy.