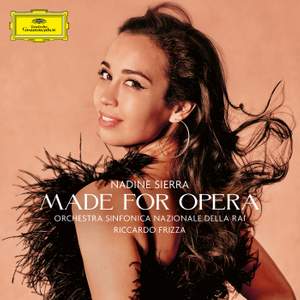 New, Made for Opera

The Italian operas suit Sierra to a T. Whichever extract from La traviata one chooses, her performance is accomplished, accurate and absolutely in character, also exemplifying her considered... — BBC Music Magazine, May 2022, 4 out of 5 stars (Performance0 / 5 out of 5 stars (Recording) More…

Interview,  Nadine Sierra on Made for Opera

The American soprano talks about her new album on Deutsche Grammophon (featuring snapshots of Verdi's Violetta, Donizetti's Lucia and Gounod's Juliette), how the #MeToo movement has played out in the opera world, and the women who've empowered her in her career.

Nadine Sierra’s latest solo album, Made for Opera, explores the psychodrama of three of the most tragic operatic heroines: Verdi’s Violetta, Donizetti’s Lucia and Gounod’s Juliette. Sierra’s childhood intuition – that she was born to sing opera – has proved correct in every way and is reflected in the title of her second solo album for Deutsche Grammophon. The dramatic presence, searing passion and technical brilliance for which the American lyric soprano regularly scores rave reviews are captured in Made for Opera, which trains the spotlight on three of the most demanding roles in the repertoire – Verdi’s Violetta, Donizetti’s Lucia and Gounod’s Juliette. Recorded with the Orchestra Sinfonica Nazionale della Rai and Capella Cracoviensis under Riccardo Frizza, the album not only reflects Nadine Sierra’s command of bel canto technique and rich range of vocal colours, but also documents her insights into the psychology of the ill-starred heroines of La traviata, Lucia di Lammermoor and Roméo et Juliette.

The Italian operas suit Sierra to a T. Whichever extract from La traviata one chooses, her performance is accomplished, accurate and absolutely in character, also exemplifying her considered phrasing and easy access to her top register.

There’s no doubt about the appealing brightness of Sierra’s voice, with its silvery upper registers and surprising tang lower down...Coloratura flows and sparkles with consummate ease and long lines are sustained with a scrupulous legato.