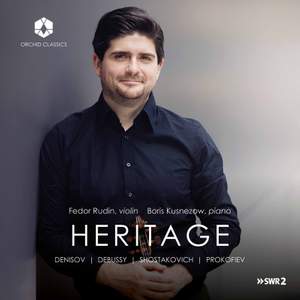 On this fascinating new release, violinist Fedor Rudin and pianist Boris Kusnezow perform works by mid-20th-century Russian composers Edison Denisov, Dmitri Shostakovich and Sergei Prokofiev, including previously unpublished music. French-Russian violinist Fedor Rudin explores and pays tribute to his heritage via this rich collection of works, including his own arrangement of Denisov’s orchestration of Debussy’s ‘Prelude and Duo’, which comes from Debussy’s unfinished opera, Rodrigue et Chimène. Other gems include Denisov’s rarely-heard Three concert pieces for violin and piano (1958), and his previously unpublished Sonatina (1972), which marks a return to his melodic youth after the musically experimental interim years. Those years are represented here by Denisov’s dodecaphonic Sonata (1963). We also hear an unfinished Sonata by Shostakovich, Rachmaninoff’s arrangement of Mussorgsky’s ‘Hopak’ from his opera Sorochinsky Fair, and Prokofiev’s unusually theatrical Violin Sonata No. 1.