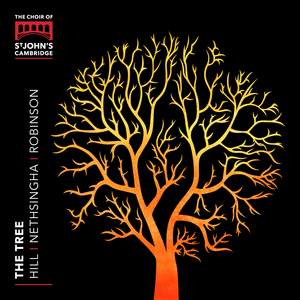 An album of hope for recovery. Andrew Nethsingha is explicit in his eloquent booklet essay that this latest well-crafted and beautifully sung disc from the Choir of St John’s College, Cambridge... — BBC Music Magazine, February 2022, 4 out of 5 stars More…

Elgar: The Spirit of the Lord is upon me (from The Apostles)

Robinson, C: Jesu, grant me this I, pray

Stainer: God so loved the world

Andrew Nethsingha and The Choir of St John’s, Cambridge present a tribute album to two former directors, Christopher Robinson and David Hill, who celebrate their 85th and 65th birthdays respectively.

Taking the idea of new growth as a starting point, the album develops from the seed of a single treble line, gradually adding organ, then lower voices, a second choir (Yale Schola Cantorum), 150 additional singers, and eventually combining nearly 500 voices together (former members and friends of the college choir).

The programme spans Hildegard of Bingen to a new commission by James Long (b.1987) and also includes works by three ex-St Johnians: Herbert Howells, Johnathan Harvey and Christopher Robinson.

The Choir of St John’s College, Cambridge is one of the finest collegiate choirs in the world, known and loved by millions from its broadcasts, concert tours and recordings.

Founded in the 1670s, the Choir is known for its distinctive rich, warm sound, its expressive interpretations and its breadth of repertoire.

An album of hope for recovery. Andrew Nethsingha is explicit in his eloquent booklet essay that this latest well-crafted and beautifully sung disc from the Choir of St John’s College, Cambridge is about rebuilding ‘after pandemic and political upheaval’.

The St John’s sound is showcased in all its flexibility.