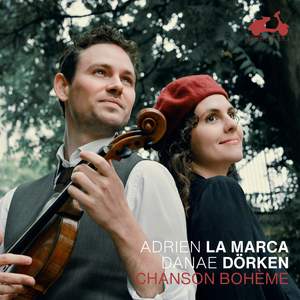 This is the story of two young musicians who met during the Coronavirus lockdown, of all things. Daniel Hope invited the French violist Adrien La Marca to appear on his Arte programme ‘Hope@home’ last December. For the first time, his duo partner was the German-Greek pianist Danae Dörken. Sparks flew between them right away, not only in Beethoven and Prokofiev, but also in the encore, La Bohème by Charles Aznavour, a nostalgic piece about two young people who enjoy the simple things in life and forget all the difficulties of reality.

Already the idea was born: why not work together on a new project that transcends the frontiers of countries and musical genres? The result was a new programme featuring classical music, French traditional music, film music and chansons, which the pair have now recorded.

At the heart of the recording are the Albumblätter of the Bohemian-German composer Hans Sitt, a violist and contemporary of Johannes Brahms. These ‘album leaves’ are masterpieces of salon music that are far too rarely found in concert programmes.

An album offering profundity, surprising associations, yet also a typically ‘bohemian’ light-heartedness that enabled the two artists to forget the dreariness of concert-deprived times. The album ‘Chanson bohème’ is their contribution, brimming with hope, for an era of encounters and genuine concerts rising above all frontiers.