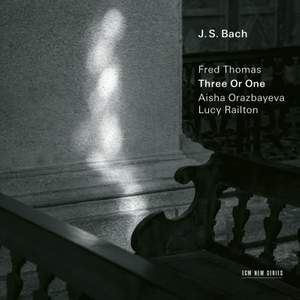 his own playing at times has something of the velvety fastidiousness of Víkingur Ólafsson…If, occasionally, the results are a little overwrought (‘Liebster Jesu wir sind hier’ BWV 633 is rather... — BBC Music Magazine, December 2021, 4 out of 5 stars (Performance) / 5 out of 5 stars (Recording) More…

Fred Thomas is an ECM artist who studied at the Royal Academy of Music and is one of London's most sought after multi-instrumentalists and composer/arranger/producers. Here is Johann Sebastian Bach in transfigured light: with organ chorale preludes, vocal cantata movements and orchestral sinfonias 24 pieces in all transcribed for trio and solo piano by Fred Thomas, and threaded into a compelling new sequence by Manfred Eicher.

Fred Thomas, who makes his ECM New Series debut here, has always worked across contexts and genres, and considers the trio's wide-ranging experience:

"an incitement to creativity. Bach often re-used his own material and it is no surprise it came out differently each time. With his imaginative, technical and improvisatory powers, do we really believe that Bach would play the same thing the same way twice?"

It's a good question, and the key to the approach taken on Three Or One.

his own playing at times has something of the velvety fastidiousness of Víkingur Ólafsson…If, occasionally, the results are a little overwrought (‘Liebster Jesu wir sind hier’ BWV 633 is rather indulgently ponderous), Thomas has nonetheless consolidated his credentials as an illuminating if idiosyncratic Bachian.

Let this programme sink in over several hearings and the music will quietly insinuate itself into your next playlist.