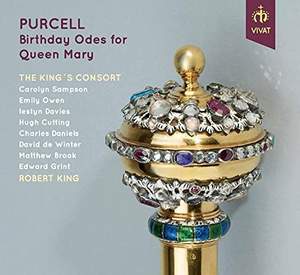 ‘Arise My Muse’ (1690) is performed from a new, clearer edition which still allows accomplished singers like Charles Daniels and Iestyn Davies to fashion the melodic lines brilliantly with individuality... — BBC Music Magazine, December 2021, 4 out of 5 stars More…

• Following their much-lauded recent recording of Purcell Royal Odes, The King’s Consort gathers together the same world-class vocal and instrumental ensemble in three more of Purcell’s finest odes written to celebrate the birthday of Queen Mary.

▪ Purcell’s odes for Queen Mary show him at his best. A glorious succession of overtures, choruses, arias and delicious ritornelli display astonishing imagination and ingenuity: whilst overtly celebratory, never far beneath the surface lies the sense of melancholy which is the hallmark of Purcell’s greatest music. “Arise my Muse” (1690), “Love’s goddess sure” (1692) and “Celebrate this festival” (1693) are amongst his finest works.

▪ For more than three decades TKC has been renowned across the globe for its performances of the music of Henry Purcell. In 1988, TKC recorded its first disc of Purcell’s odes: that ground-breaking series was followed by complete series of the sacred music and the secular songs, and changed the musical world’s perception of Purcell. Since then there has been hardly a year in which the odes haven’t appeared in TKC’s concert programmes: this is music which runs through the ensemble’s veins.

▪ In April 2021, TKC returned to the studio to record three substantial odes written for the birthday of Queen Mary. An outstanding team of soloists (led by Carolyn Sampson, Iestyn Davies, Charles Daniels and Matthew Brook) included one member of the ensemble who took part in that first recording, alongside others who have been performing these works with TKC for twenty years. On the other hand, three of the singers were not even born when TKC first recorded Purcell odes. A superlative instrumental ensemble provides equally outstanding contributions.

▪ The recording was made in the spacious surroundings of recently restored Fairfield Halls, whose warm, clear acoustic is perfect for this music. Extensive presentation includes a 52 page booklet with substantial liner notes in three languages, together with sung texts and session photos.

‘Arise My Muse’ (1690) is performed from a new, clearer edition which still allows accomplished singers like Charles Daniels and Iestyn Davies to fashion the melodic lines brilliantly with individuality and style.