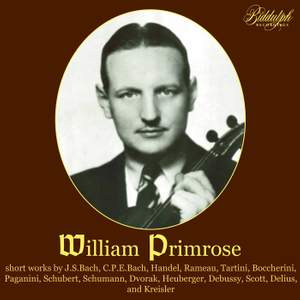 Kreisler: Scherzo (In The Style Of Dittersdorf)

No. 1, Liebesfreud (Transcr. for Viola & Piano)

This CD features recordings by the great Scots-born violist William Primrose. The recordings were made between 1939-42, which most people regard were Primrose’s prime years. This was the period in which he collaborated in many chamber music recordings with Heifetz and Feuermann, and also founded the Primrose String Quartet, with Oscar Shumsky and Josef Gingold and Harvey Shapiro. Especially notable about this CD release is that it features 14 previously unissued recordings. Among the works that are new to the Primrose discography are Handel’s popular Sonata in A, as well as such favourites as Schubert’s Ave Maria, Schumann’s Warum? and Debussy’s Girl with the Flaxen Hair. Also included are numerous original compositions and transcriptions by Fritz Kreisler, Primrose’s idol. These include Liebesfreud, Syncopation and Aucassin and Nicolette, as well as pastiche pieces in the style of Baroque composers. Another item that receives its premiere on this CD is Kreisler’s transcription of Richard Heuberger’s beloved aria Im chambre séparée. This CD ends with the first commercial release of two well-known English salon pieces.