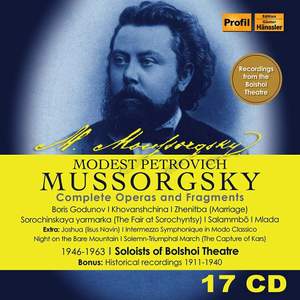 "Modest Petrovich Mussorgsky was born - according to the Julian calender - on March 9 (Gregorian calender: March 21), 1839 in Karevo in the Russian district of Pskov. When he died on March 16 (28), 1881 at the age of just 43 years old in St. Petersburg, he had I ived an artistically rich, gregarious yet tragic life, ending his days in poverty and alcoholdependent. His career as a composer is closely associated with a group of artists known in the world of music as the ""Mighty Handful"" or simply The Five. Mi ly Balaki rev ( 1937-1910), who was something Ii ke the chief ideologue and artistic mastermind of ""The Five"", ral Ii ed around him a group of like-minded composers with whom he consolidated and publicized his ideas about a form of Russian music that should not be ""corrupted"" by ""Western"" influences nor regulated by academic training. Only after Glinka in the second half of the nineteenth century did Russi an opera really come to the fore. Mussorgsky was a key player in promoting this trend - as we can see in the light of his posthumous fame. In accordance with his slogan of ""off to new horizons!"" he took a radical and highly unconventional approach unparalleled by any of his contemporaries. And, sadly, in keeping with his disposition and his addiction, he did it in more entirely random ways than anyone else. Literally not one of his stage works has come down to us in a fl nished, let al one authorized, version."