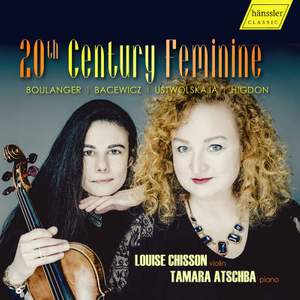 "This album focuses on some of the greatest compositions for violin and piano by female composers of the twentieth century. Lili Boulanger (1883-1918) was the first woman to be awarded the Prix de Rome – the most prestigious composition prize of the day. The body of work of the Polish composer Grazyna Bacewicz (1909-1969) ranks on the same level with that of many of her more prominent male contemporaries. Galina Ustvolskayas (1919-2006) only Violin Sonata (1952) is defined by the era of Stalin’s Great Purge. Jennifer Higdon (b. 1962) has won two Grammys and the coveted Pulitzer Prize and since the mid-1990s has been acknowledged as one of the best-known female composers in the USA. Louise Chisson was born in Bordeaux. At the University of Music and Performing Arts in Vienna, where she attained her Master’s degree with distinction, awarded unanimously by the entire jury. She stands out from the crowd with her courageous choice of music and her skilled technical precision in her performance. Louise Chisson has been first violin with the Ensemble LUX string quartet since 2013. BBC Music Magazine praises the Georgian pianist Tamara Atschba as an “inimitable, unbelievably inspired pianist”. Her strong musical personality, the high quality of her playing and the exceptional timbre of her sound have been highly commended by internationally renowned musicians. Since 1995 she has been teaching at the University of Music and Performing Arts in Vienna."