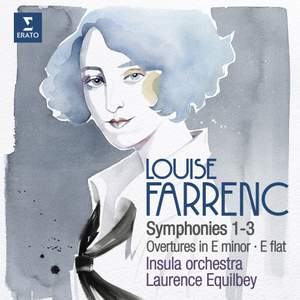 Following her release in early July of a recording of two symphonies by Louise Farrenc, conductor Laurence Equilbey digs further into the life and work of a unique French composer.

Recording of the Week,  Farrenc from the Insula Orchestra and Laurence Equilbey

The French orchestra begins its planned cycle of the symphonic works of Louise Farrenc with her Symphonies Nos. 1 and 3.

Laurence Equilbey, conducting her period-instrument Insula Orchestra, champions the composer Louise Farrenc, a prominent and pioneering figure in 19th century Paris. This album presents two of Farrenc’s three symphonies, No. 1 in C minor, first heard in 1845, and No. 3 in G minor, premiered in 1849. “The score is so well written that it deserves a prominent place in the history of the early Romantic symphony,” wrote the Financial Times after a performance of the Symphony No 3 in London, marking International Women’s Day 2018. “Equilbey and the Insula orchestra gave it a fleet, fiery performance. Their crusading spirit lived up to the day’s billing.” The Daily Telegraph observed that the symphony “was full of engaging inventions … It’s clearly a fine piece; all it needs now is to be heard, many times.”

post-Beethovenian works that show Farrenc at her distinctive best.

It would be hard to imagine better performances, a better sounding recording, or better advocacy for Farrenc than we receive here from Laurence Equilbey and her period instrument chamber orchestra, the Insula Orchestra.

In their lucidity, colour and feeling for the music’s architecture, with climaxes unerringly prepared and clinched, these performances would be hard to better.

It’s a delight to hear woodwind textures used so generously...The Adagio cantabile [of No. 3] – a masterclass in elegant lyricism that is definitely my favourite movement on the album – opens with a beautiful cantilena for clarinet accompanied by rich low woodwind. Lest one think that the wind have all the fun, though, the Scherzo’s rushing semiquavers and trills put the strings through their paces – it’s credit to the players’ agility that the touch remains light, and Equilbey is clearly keen to keep the pace up.

For the woodwind writing alone, brilliant and unusual, this music stands out from the symphonic crowd, played here with style.