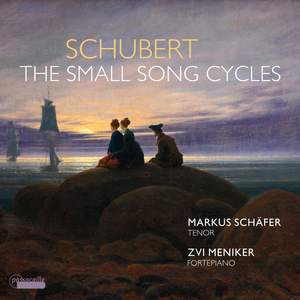 Some of these "miniature cycles" consist of songs written at different times and under different circumstances, but which Schubert himself assembled on the basis of thematic and textual connections.

Today, these songs are usually performed as individual works and taken out of context - here they are presented in the order carefully planned by the composer, just as they were heard at the famous Schubertiades.

Although uncomfortably challenged in the upper reaches of ‘Du bist die Ruh’, and momentarily effortful elsewhere, Schäfer’s lyric tenor is an ideal instrument for Schubert, marrying textual attentiveness and an innate sense of line whether dramatic or contemplative...Meniker is a mostly illuminating collaborator.