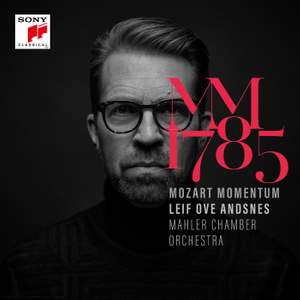 The Norwegian pianist talks about his new album, the first of a diptych that focuses in on a formative moment in Mozart's evolution as a composer.

Leif Ove Andsnes’s ‘Mozart Momentum 1785’ is a 2-CD portrait of the master composer, exploring his most revolutionizing, creative and game changing years for piano music. “When you realize how quickly Mozart developed during the early years of the 1780s it makes you ask: why did this happen? What was going on? It’s about the momentum of his creativity at this time,” says Leif Ove Andsnes. Mozart Momentum 1785 is the first of two releases exploring those especially remarkable years. It includes Piano Concertos nos 20–22, the Piano Quartet in G minor, Masonic Funeral Music and Fantasia in C minor for solo piano.

In 1781, aged 25, Mozart made the bold move of going freelance as a musician and composer. Within a couple of years he had established himself as one of the most famous musicians in Vienna but by 1785 he had competition on his doorstep. As more and more talented composers and musicians arrived in the city, freelancers like Mozart had to become ever more inventive to distinguish themselves and win over the public’s affection. It was in these two years – 1785 and 1786 – that Mozart’s musical imagination flourished like never before.

highlights include a finely attentive account of the G minor Piano Quartet, showing vivid collegiality between the performers; Andsnes’s C minor Fantasy, perfectly balanced and full of dramatic contrast; and the Masonic Funeral Music, directed by Matthew Truscott, making a strong impression with its dark colours and character.

Socially distanced they may have been but the camaraderie that was so evident in their groundbreaking Beethoven cycle with Leif Ove Andsnes is, if anything, even more apparent here.

With so many alternatives out there (among classics, Mitsuko Uchida, Murray Perahia, András Schiff), why this? The balance between pianists and ensemble is ideal, clear, vital. And the choice of cadenzas, especially the one by Dinu Lipatti, will make your ears stand up.