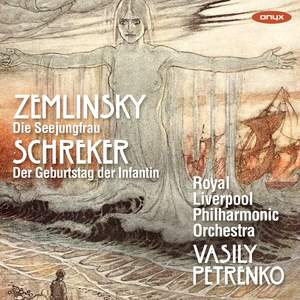 This warmly recorded version not only goes to the top of the tree as the most satisfying account of Zemlinsky’s score in the current catalogue, but also trumps its closest rivals in offering... — BBC Music Magazine, July 2021, 5 out of 5 stars More…

Schreker: Der Geburtstag der Infantin (The Birthday of the Infanta)

Following on from their critically acclaimed albums of Stravinsky, Elgar and Tchaikovsky, the awardwinning team of Vasily Petrenko and the RLPO turn to Zemlinsky and Schreker.

Premiered in the same concert as his brother-inlaw Schoenberg’s ‘Pelleas und Melisande’ in 1905, Zemlinsky’s Die Seejungfrau (after Hans Christian Andersen) was almost ignored by the reviewers.

Considered too conservative for the progressives and too progressive for the conservatives, Zemlinsky struggled to overcome the negative reviews of this masterpiece and withdrew it in the immediate aftermath of the premiere.

Vasily Petrenko for this recording uses the original version of the score which restores the ‘bei der Meerhexe’ episode to the 2nd movement.

Schreker’s Dance Pantomime ‘Der Guburtstag der Infantine’ (story by Oscar Wilde) was given its premiere in 1908 and was his first big success. One of the most progressive of the Viennese composers of this period, Schreker’s star would sadly wane, aided by the rise of anti-Semitism and the Nazis. Stripped of his official posts, he died in 1934 of a stroke.

This warmly recorded version not only goes to the top of the tree as the most satisfying account of Zemlinsky’s score in the current catalogue, but also trumps its closest rivals in offering the most apposite and brilliantly performed coupling of Franz Schreker’s colourful ballet score Der Geburtstag der Infantin.

I applaud Petrenko and the orchestra for delivering outstanding readings of these well-matched historical mementos. For listeners devoted to Die Seejungfrau, this account could easily be a first choice. It comes in vivid, lifelike sound that brings out the vibrancy of Zemlinsky’s orchestration. Better performances aren’t likely to come our way for a long time.

Petrenko’s interpretation [of the Schreker] is a pleasure from first to last. The excellent playing of the Royal Liverpool Philharmonic brings each of the episodes vividly to life.

There are many moments for strings and winds to shine as they play an innocent melody for the Infanta, and there's an exquisite section featuring a solo violin for the dance of the puppets. It's not all sugar-coated sweetness, though, and Petrenko makes sure to bring out the darker moments.

The RLPO’s performances of both works perhaps do lack the last degree of tonal finesse that these scores ideally deserve, but the pairing is a bold, imaginative one, which ought to win more admirers for two composers whose music has never quite made it into the orchestral mainstream.