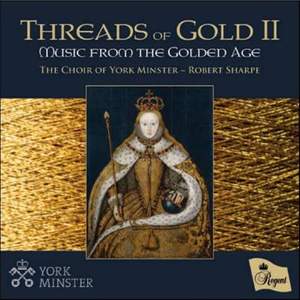 The enormous choir – some 45 members, male and female – may be contrary to current performance practices, but it is well under control and used to great effect...The resonant acoustic does not... — BBC Music Magazine, November 2021, 4 out of 5 stars More…

Gibbons, O: Behold, thou hast made my days

Tomkins: O God, the proud are risen against me

Gibbons, O: Almighty God, who by Thy Son

Following the release of Threads of Gold in February 2017, we’re delighted to present a second recording devoted to Tudor and Jacobean sacred choral music from the Choir of York Minster, conducted by Robert Sharpe.

Captured in the warm and radiant acoustic of the Lady Chapel of York Minster, this wide-ranging survey traces the ‘threads of gold’ weaving through the development of sacred choral works from immediately before the reign of Queen Elizabeth I (1558–1603) to the early Jacobean period following – a period considered a Golden Age in English music.

With sacred works from the major composers of the second half of the 16th century, and the early years of the 17th – Thomas Tallis, William Byrd, Orlando Gibbons, and Thomas Tomkins – there are examples of Latin polyphonic Motets, concise a capella anthems in both Latin and English, and more elaborate verse anthems with extensive solos and organ accompaniment.

The recording features several of the most well-known examples of church music from the period, including ‘Ave Maria’ by Robert Parsons, ‘Ave verum corpus’ by William Byrd, and arguably one of the most perfect and beautifully-simple pieces of music ever written, ‘If ye love me’ by Thomas Tallis.

‘This is a radiant recording of glorious music, sung by a fine

provincial English cathedral choir right at the top of its game.’

Reviews of other CDs from the Choir of York Minster on Regent:

‘With composers Edward Bairstow and Francis Jackson among its former choirmasters,York Minster has an admirable musical heritage. The current choir celebrates it in style.’ BBC Music, July 2019

‘...the music and its performances are simply stunning.’ Cathedral Music

‘...a soaring paean of excellence and dedication.’ Organists’ Review, September 2019

The enormous choir – some 45 members, male and female – may be contrary to current performance practices, but it is well under control and used to great effect...The resonant acoustic does not obscure the individual lines, nor the carefully enunciated text, and the subtle use of varied dynamics serves to shape the mass of sound.