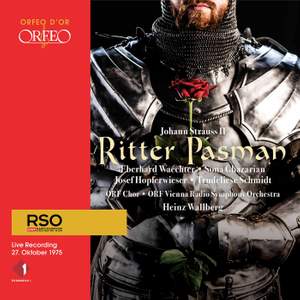 When the court opera director Wilhelm Jahn commissioned Johann Strauss Jr to write a ‘genuine’ opera, the Waltz King readily accepted. The result was Ritter Pásmán, his only stage work to step into the more exclusive genre of opera, even though the plot is reminiscent of the world of operetta. Based on the narrative poem Pázmán lovag by the Hungarian writer János Aranyi (1817-1882), it deals with jealousy and reciprocity. The comic opera's premiere at the Vienna Court Opera on New Year’s Day 1892 was a major society event, but its artistic success lagged somewhat behind; the reviewers of the premiere gave it a cool reception, even though they hailed the ballet music at the beginning of Act III as an absolute masterpiece. (It's worth noting that this was the first time a cimbalom had been used in the court opera orchestra).