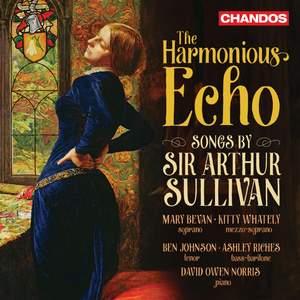 Like soprano Mary Bevan, tenor Ben Johnson and baritone Ashley Riches, [Whately] brings clear diction and a good range of tone to the material – much of it forgotten today...in Whately’s visionary... — BBC Music Magazine, August 2021, 4 out of 5 stars More…

Sullivan, A: The Masque at Kenilworth, Op. 4

Sullivan, A: I Heard the Nightingale

Sullivan, A: The Sapphire Necklace

Over the Roof (Arr. for Voice & Piano)

Sullivan, A: Will He Come?

Sullivan, A: Thou Art Weary

Sullivan, A: The Moon in Silent Brightness

Sullivan, A: The Snow Lies White

Sullivan, A: Looking Back

Sullivan, A: The Maiden's Story

Sullivan, A: The Sailor's Grave

Sullivan, A: Let Me Dream Again

Sullivan, A: Other Days

Sullivan, A: The Distant Shore

Sullivan, A: The Love That Loves Me Not

Sullivan, A: A Shadow

Sullivan, A: The Lost Chord

Sullivan, A: The Absent-Minded Beggar (Arr. for 4 Voices & Piano)

Although most widely remembered for his operettas in partnership with W.S. Gilbert, Sir Arthur Sullivan was the most famous of all British composers of the nineteenth century. He was revered as a composer of oratorios, and was urged by Queen Victoria to compose a grand opera. The result, Ivanhoe, achieved 155 consecutive performances (in an opera house especially built for it). Achieving equal success in his lifetime, his substantial legacy of songs fell into neglect in the twentieth century, but as this album demonstrates Sullivan’s endlessly fertile melodic gifts withstand comparison with those of any other song composer. David Owen Norris and his quartet of outstanding young British singers deliver this fascinating programme with terrific style and panache.

Like soprano Mary Bevan, tenor Ben Johnson and baritone Ashley Riches, [Whately] brings clear diction and a good range of tone to the material – much of it forgotten today...in Whately’s visionary performance, ‘The Lost Chord’ registers as the masterpiece it is.

The performances on The Harmonious Echo are uniformly admirable. All of the vocalists sing with a lovely tonal quality, secure technique, and sensitivity to the text and music. While it is true that these songs are in a sentimental vein, the artists never overplay that aspect.

With very few exceptions, they come across as fresh and vivid, in thoughtful, committed performances from four excellent young British singers. Norris’s accompaniments are tasteful in the best sense.

This second volume of Sullivan’s songs performed by Norris, Bevan, Johnson and Riches brings the melodic inventiveness of his popular operettas to the Victorian salon, with beguiling results.