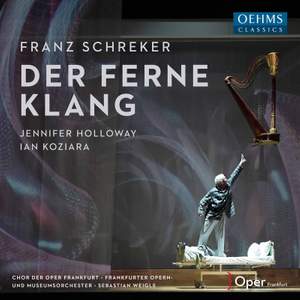 This is now a clear first choice for anyone wanting to listen to this fascinating opera. — Gramophone Magazine, July 2021 More…

Der ferne Klang by Austrian composer Franz Schreker (1878–1934) premiered on 18 August 1912 at the Frankfurt Opera House. Schreker began composing his first full-length opera in 1901, after completing the libretto he had written in just a few weeks. Initially considered impossible to perform, the work brought Schreker instant fame. It now returns to the location of its premiere for the first time since 1945. With one exception, Schreker was both composer and librettist for all of his stage works, almost half of which were performed or premiered in Frankfurt. The Choir of the Oper Frankfurt and Frankfurter Opern- und Museumsorchester perform under the direction of Sebastian Weigle.

This is now a clear first choice for anyone wanting to listen to this fascinating opera.

Paramount among its attributes is the conducting of Sebastian Weigle, who proves himself a first-rate Schreker interpreter, able to capture the otherworldly aspects of this mystical score while still delineating its dramatic thrust and its musical complexities...Another special element of this set is the casting of the rising American jugendlich tenor Ian Koziara as Fritz.

Weigle makes sure that the beauty of the lusciously detailed scoring emerges very powerfully from the Frankfurt Opera orchestra, providing a perfect cushion for the voices, which the soprano Jennifer Holloway certainly takes full advantage of, warm-toned and wonderfully secure as she traces the downward spiral of Grete’s life.