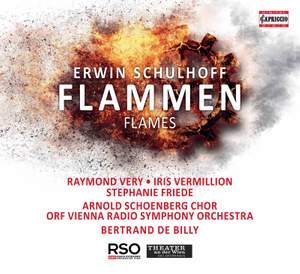 Bertrand de Billy is in his element, whether it’s on the dance f loor, ushering in the Dies Irae or leading a battery of orgasmic bells. Raymond Very is a handsome Don Juan, at his best in the... — BBC Music Magazine, June 2021, 4 out of 5 stars More…

In the 1920s and 30s, Czechoslovakia was flourishing culturally and boasted a multi-faceted musical scene. In considering the works of composers such as Pavel Haas, Gideon Klein, Hans Krása, Viktor Ullmann and Erwin Schulhoff, we can see how they develop along similar stylistic lines, as measured against the established 'Prague School', which was a counter-movement to the 'Viennese School'. Schulhoff's early works feature a Reger-influenced late Romantic approach that later developed, through an emphasis on rhythm, towards expressionism and neo-classicism, while also including elements of jazz. The starting point for Flammen is the Don Juan story, but the aim of Beneš and Schulhoff's work is not to present the colourful seducer, but the fate of a man driven by his desires and needs who cannot even remotely find happiness and peace in constancy. In his opera, Schulhoff brilliantly manages to reconcile this different dramaturgical approach with a kind of distanced homage to Mozart's work.

Bertrand de Billy is in his element, whether it’s on the dance f loor, ushering in the Dies Irae or leading a battery of orgasmic bells. Raymond Very is a handsome Don Juan, at his best in the lament that ends Act I.

Flammen gathers fierier momentum under Bertrand de Billy and his impressive Vienna Radio Symphony Orchestra than it did in Decca’s pioneering set.

Though the dramaturgy is sometimes creaky, the range of Schulhoff’s score is fascinating... And despite the intrusive stage noise, it’s the vivid orchestral music that comes out best in this performance under Bertrand de Billy – even if that’s sometimes at the expense of the voices, which are not always as far forward as they might be.