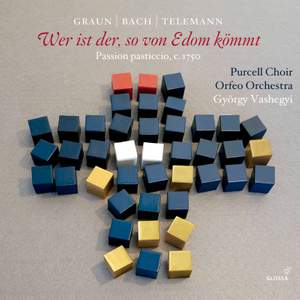 No. 24, In der ersten Tagestund

The conductor Gyorgy Vashegyi and his ensembles, the Orfeo Orchestra and the Purcell Choir, are fluent in various fields of baroque and classical music, with a particular predilection for French baroque opera. However, one of their favourite lines of work is Lutheran sacred music, and a good example of this is this beautiful work, Wer ist der, so von Edom kommt (Who is this that comes from Edom?), a period pasticcio with pieces by various composers. Graun (a composer at the court of Frederick II who was greatly admired by his contemporary colleagues), rubs shoulders here with Telemann and Johann Sebastian Bach, as well as with a mysterious unknown, who wrote several of the most impressive passages in the work. In fact, this is a Passion Oratorio, a reflection on the events related to the martyrdom of Christ based on freely chosen texts without following a precise Gospel and without summoning the usual characters of the drama into an imaginary setting. The originality of this patchwork also lies in the distribution of the text where contrary to many passions of the time the events of the last days of Jesus life are told by chorales that float in the meditative atmosphere of the recitatives, arias and choruses. These chorales are especially impressive in the second part: the density of the writing, the unique dramatic harmonies, the arrangement of the voices are of such an exceptional quality that their author could definitely be Johann Sebastian Bach himself... whom the author of the essay included in the libretto, Gergely Fazekas, also points to as the possible compiler of this masterpiece.