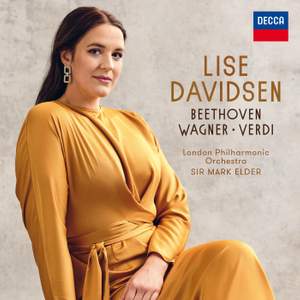 Her voice reminds me now of Birgit Nilsson’s at the same stage, an Elsa and Sieglinde who is a Brünnhilde in waiting, with the same thrilling edge to her top register, though she isn’t lacking... — BBC Music Magazine, June 2021, 5 out of 5 stars (Performance) / 4 out of 5 stars (Recording) More…

Her second album explodes from the speakers with Leonore’s aria from Fidelio, the role which bowled over critics in March 2020: “She will surely be the outstanding Leonore of the next generation.” ★★★★ Financial Times. Presenting some of the great operatic heroines from the German and Italian repertoire: Verdi’s Leonora from La forza del destino, Cherubini’s Medea, and Santuzza in Cavalleria rusticana further demonstrating her versatility. Featuring Wagner’s five Wesendonck Lieder which has become a signature piece for Lise and which affords us a glimpse of her future Isolde. Recorded in lockdown with the London Philharmonic Orchestra and the doyen of British opera conductors, Sir Mark Elder.

“Voices like hers come round once in a generation.” – ★★★★ Financial Times

“The voice of the century.” – ZDF Heute Journal

“A God-given instrument, used with sensitive artistry. To hear it alone is worth the price of any ticket.” ★★★★ The Daily Telegraph

“One of the greatest vocal talents to have emerged in recent years, if not decades.” – Gramophone

Her voice reminds me now of Birgit Nilsson’s at the same stage, an Elsa and Sieglinde who is a Brünnhilde in waiting, with the same thrilling edge to her top register, though she isn’t lacking in her lower notes either. As the Ave Maria from Verdi’s Otello makes clear, she can also scale her voice down.

Another fine album from an artist who, quite simply, is one of the greatest voices to be heard today.

The Wagner sounds properly calm and contemplative. But what’s interesting here is her success with ‘Voi lo sapete’ from Cavalleria rusticana and ‘Pace, pace’ from La forza del destino. Davidsen has sung French, Russian and Czech roles, and in this Italian repertory she brings vocal richness and idiomatic confidence to the music.

Beethoven’s notoriously unforgiving two-octave leaps and breath-sapping long phrases seemingly posing no problem at all for Davidsen’s formidable lung-capacity and seamlessly-integrated instrument..Elder’s tempi are often luxuriously spacious, capitalising on his soloist’s rock-steady breath-control, and he clearly relishes being in a position to let the brass entirely off the leash when the opportunity presents itself – Davidsen in full cry is more than a match for Wagner’s thickest scoring.

There is so much to enjoy in the young Norwegian soprano’s singing, I am reluctant not to join in the blanket adulation of a new artist promoted by her record company as a “voice of the century”..the glorious top of the voice shines in an exquisitely graded messa di voce in Pace, pace from Verdi’s La forza del destino.

Davidsen’s soprano has a brighter gleam and greater expansiveness than that of any other singer to have emerged on to the opera scene in the last decade. She’s not a singer to signpost every moodswing; listen closely, though, and her attention to detail and to the colour of her sound is telling.