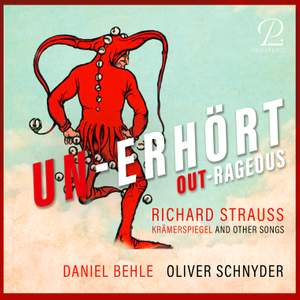 Miraculous longbreathed phrases in the slower winter and wood meditations, big near-heroic outbursts and a unique way with inward reflection all mark out the highest artistry. — BBC Music Magazine, June 2021, 4 out of 5 stars More…

The PROSPERO label, known for its beautifully equipped productions, presents here an exceptional recital of well-known and lesser-known songs by Richard Strauss, outstandingly interpreted by Daniel Behle, Opus-Klassik prize winner and 'Singer of the Year 2019', and Swiss pianist Oliver Schnyder. The program includes Gesange des Orients Op.77 and Kramerspiegel Op.66, two rarely heard song cycles by the composer. The latter has a fascinating history: the publisher Bote & Bock had wanted to secure the rights to the next songs for the publication of Op.56 by a clause, which Strauss resented so much that it almost came to trial. The composer took his revenge with the bizarre Kramerspiegel, a subtle musical attack on the institution of music publishing. The many allusions and numerous musical subtleties are vividly explained in the detailed booklet text by Richard Stokes, a noted Strauss expert. It is also interesting to note that the piano part in Kramerspiegel is one of the most demanding the composer ever created. Oliver Schnyder masters these hurdles with remarkable musical depth and stirring bravura. The production also contains a rarity in the form of the song "Der Schmetterling" ("The Butterfly") on a text by Hermann Hesse, since it does not appear in any of the composer's catalogues of works. Even proven Strauss connoisseurs and specialists were unaware of it until now. Find out for yourself what this enchanting musical miniature is all about!

Miraculous longbreathed phrases in the slower winter and wood meditations, big near-heroic outbursts and a unique way with inward reflection all mark out the highest artistry.

It’s the performance of Krämerspiegel that’s the album’s undoubted highlight, though, funny and moving by turns. Behle sings with a suaveness and sense of mischief that’s difficult to resist...Schnyder’s playing is superbly witty.

Behle serves up this veritable banquet of invective [Krämerspiegel] with sardonic, cabaret-esque glee. Never afraid to make an ugly sound when the text requires it (which is often), he also supplies real tonal beauty in the phrases representing the noble artist-creator, and Oliver Schynder works miracles with the extended solo piano passages.

[Krämerspiegel is] not a masterpiece, but it has a characterful performance here.