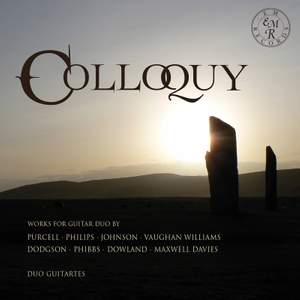 Dodgson: Promenade I for 2 Guitars

EM Records is delighted to announce its first guitar disc with compositions from the Renaissance up to the present day.

Plucked instruments featured prominently during the Renaissance period in English Music; we think especially of the outstanding lute music of John Dowland. This epoch is considered to be the Golden Age of the plucked instruments that have inspired English composers throughout the centuries. One of the most influential works of the Twentieth century for the classical guitar is Benjamin Britten's Nocturnal After John Dowland.

This disc contains the programme that Duo Guitartes performed at the English Music Festival in May 2017 and includes works by John Dowland, Peter Philips, John Johnson, Henry Purcell, Ralph Vaughan Williams, Peter Maxwell Davies, and Stephen Dodgson. The majority of these works are new arrangements by Duo Guitartes.

A further outstanding highlight of this disc is the world premire recording of Serenade by Joseph Phibbs, which is dedicated to Duo Guitartes.