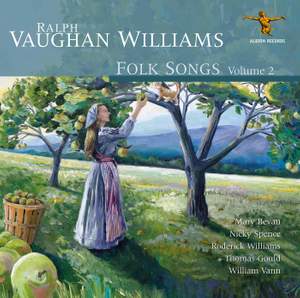 This is one of the finest produced song albums that’s come my way. All three singers, recognised artists in their vocal prime, perform their allotted songs with commitment and character. They... — BBC Music Magazine, June 2021, 4 out of 5 stars (Performance) / 5 out of 5 stars (Recording) More…

No. 3, Lord Thomas and Fair Ellinor

No. 6, Fair Margaret and Sweet William

No. 8, The House Carpenter

No. 9, The Twelve Apostles

No. 1, Searching for Lambs

No. 8, Down by the Riverside

No. 25, The Female Highwayman

This is the second in a series of four albums recording all 80 of the folk songs in English that Ralph Vaughan Williams arranged for voice and piano or violin. 57 of the 80 songs have not previously been recorded in these arrangements. This second album has 19 tracks including 15 world premières. It includes Folk Songs collected from the Southern Appalachian Mountains by Maud Karpeles and Cecil Sharp in 1916-1918, arranged by Vaughan Williams with piano accompaniment in about 1938. Additionally, there are two English Folk Songs for Voice and Violin. A miscellany of English folk songs includes 'I Will Give my Love an Apple' and concludes with a 'Farmyard Song' which is difficult to perform without collapsing in laughter. Once again, though Vaughan Williams is well known as a collector of folk songs, his own collection by no means predominates. Praised by Opera for her "dramatic wit and vocal control", British soprano Mary Bevan is internationally renowned in baroque, classical and contemporary repertoire, and appears regularly with leading conductors, orchestras and ensembles around the world. Opera singer Nicky Spence is one of Scotland's proudest sons and his unique skills as a singing actor and the rare honesty of his musicianship are steadfastly earning him a place at the top of the classical music profession. Roderick Williams is one of this country's most sought after baritones and is constantly in demand, encompassing a repertoire from the baroque to world premières. In 2016 he won the Royal Philharmonic Society's Singer of the Year award.

Violinist Thomas Gould (leader of Britten Sinfonia) has fast established for himself a reputation as one of Britain's foremost interpreters of contemporary music whilst also remaining dedicated to the core classical repertoire. A multiple-prize winning and critically acclaimed conductor and accompanist, William Vann is equally at home on the podium or at the piano and is the founder and Artistic Director of the London English Song Festival. Promo Video: https://youtu.be/x8szz9fzNg0 Extracts from reviews of Volume 1: Once the new collection is completed, it will be one of the finest monuments Vaughan Williams could have wanted, and a real jewel in the crown of the RVW Society.. To describe what Albion is doing here as important would be the cultural understatement of the year." - Simon Heffer, Saturday Telegraph Soloists Roderick Williams, Nicky Spence and Mary Bevan are all persuasive, while the composer's instrumental elaborations (William Vann, piano) have a beauty and interest all their own...this first trip to Vaughan Williams's folk song workshop is an absolute tonic and delight." - Geoff Brown The Times (4 STARS) "The songs on this present disc could scarcely receive better advocacy. All three singers enter fully into the spirit of the songs and sing them with commitment and, as you'd expect, a high degree of skill...They treat the songs with the respect they deserve and, my goodness, does it pay off. William Vann accompanies expertly throughout...I enjoyed this disc from start to finish. It's an auspicious beginning to the series which will bring us all of VW's solo-voice folk song arrangements. I am keen to hear the next three releases as they appear." - John Quinn, MusicWeb International "All three soloists are careful to avoid an over-sophisticated response to songs whose strength is their directness of expression and simple integrity. Williams in particular is a perfect singe in this repertoire, with immaculate annunciation and a happy knack of letting the music speak unaffectedly for itself." 4 Stars / 5 Stars, BBC Music Magazine "I loved it, dear readers. The Folk Songs from Sussex (1912) were a delight: varied, moving, witty, expressively sung... subtly accompanied, with the standout track being How Cold the Wind doth Blow, employing two voices, piano and violin." - Elgar Society

This is one of the finest produced song albums that’s come my way. All three singers, recognised artists in their vocal prime, perform their allotted songs with commitment and character. They are given firstrate accompaniment by pianist William Vann and, in the Two English Folk Songs for voice and violin, appropriately ‘rustic’ playing by Thomas Gould – a highlight of this album.