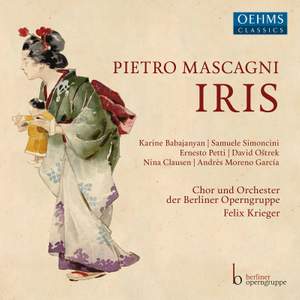 Babajanyan grows into the role of Iris in this live recording from Berlin, though as a kind of living doll there’s little to help her walk or talk like the abused woman she is...The conviction... — BBC Music Magazine, July 2021, 3 out of 5 stars (Performance) / 4 out of 5 stars (Recording) More…

Giù per la via (Live)

Pietro Mascagni (1863–1945) was one of those composers who were famous for a single work, the rest of their output remaining practically unknown. His opera Iris is based on a libretto by Luigi Illica, who also wrote the libretti for Puccini operas such as La Bohème, Tosca and Madama Butterfly.

It was Illica who gave birth to the idea of an opera about Japan. Exotic subjects set in distant lands were in vogue throughout Europe at the time, particularly those set in the Far East. It was Mascagni’s express wish to write ‘original’ music for this specific material, something that was previously unheard-of.

“The impression made by the orchestra of the Berliner Operngruppe under Felix Krieger was overwhelming, who brilliantly conveyed Mascagni's multi-layered music with its shimmering strings, the impressionistic-melancholy mood and the luxuriant melody.” – Bernd Hoppe, Opera Lounge

Babajanyan grows into the role of Iris in this live recording from Berlin, though as a kind of living doll there’s little to help her walk or talk like the abused woman she is...The conviction that Felix Krieger and the Orchester der Berliner Operngruppe bring to Mascagni’s score is well beyond doubt.

Felix Krieger marshals his Berlin forces with impressive command...Babajanyan’s singing as Iris has a luminous core, edged around with a tremulous fervour.

In some ways it makes a strong musical case for what is assuredly one of Mascagni’s most inventive and accomplished scores...Krieger ensures the music’s constant flow and is observant of Mascagni’s detailed markings. Vocally, things are more mixed...The prime vocal asset on the set is Ernesto Petti’s brisk and dynamic baritone, cast as Kyoto, the hard core to his tone invariably cutting through.