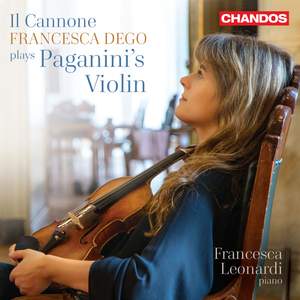 Dego has an expressive touch, skittering over the strings, yet finding plenty of attack in Szymanowski’s Trois Caprices. Corigliano’s Red Violin Caprices are at times spellbinding, descending... — BBC Music Magazine, May 2021, 4 out of 5 stars More…

Schnittke: A Paganini for violin solo

The violinist talks about her new recording on Paganini's own violin, featuring works by, dedicated to and responding to the great composer.

Paganini’s violin, the legendary ‘il Cannone’, made by Giuseppe Guarneri del Gesù in 1743, is one of the most important musical instruments in the history of Western music. Paganini was the greatest virtuoso of his time, acclaimed throughout Europe and an inspiration to performers and composers alike. On his death, he bequeathed ‘il Cannone’ to his home city of Genoa, where it is permanently housed under high security in the Town Hall. It has been heard on record just a handful of times. Francesca Dego was given the honour of recording with it after the success of her first performance on the instrument, in October 2019, when she was invited to play Paganini’s First Violin Concerto at the Paganini Celebratory Concert at Teatro Carlo Felice, in Genoa. Francesca Dego comments: ‘I feel so privileged to be able to share the soul of ‘il Cannone’ in a new recording. I remember thinki ng long and hard about the ideal programme and carefully selecting a series of works paying homage to Paganini. The ‘Cannon’ has pretty much only ever been used to record music by Paganini, so the idea of its celebrated tone teaming up with composers who idolised the Italian virtuoso throughout history is really exciting to me!’

Dego has an expressive touch, skittering over the strings, yet finding plenty of attack in Szymanowski’s Trois Caprices. Corigliano’s Red Violin Caprices are at times spellbinding, descending into a guttural, harried chase. Leonardi accompanies sensitively throughout.

If you’re keen to hear Paganini’s favourite plaything (or favourite fourstringed one, at any rate), performed with technical finesse and strong musicality while shown off by suitably polished engineering, then this amply does that job.

Dego handles the Italian virtuoso’s legendary Guarneri with audible tender loving care throughout this imaginative programme, though the kid gloves certainly come off for Schnittke’s A Paganini, which sees her digging into the dramatically retuned G-string with gusto; there’s a lovely soft-focus glow to the instrument’s lower register, whilst its shimmering high overtones are showcased in Boccadoro’s Come d’autunno (specially commissioned for the project) and Kreisler’s Scherzo-Caprice.