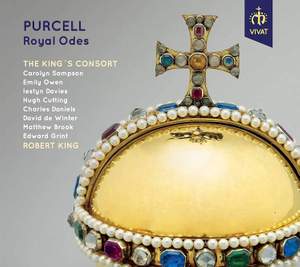 In Welcome Glorious Morn for Queen Mary in 1691 we reach a higher musical level. Both Carolyn Sampson and Matthew Brook suavely maintain their vocal lines against the ingenious but busy aria... — BBC Music Magazine, April 2021, 4 out of 5 stars More…

An outstanding new recording from The King's Consort brings together a world-class vocal and instrumental ensemble in a glorious programme of three of Purcell's finest Royal Odes.

For more than three decades TKC has been renowned across the globe for its performances of the music of Henry Purcell. In 1988, TKC recorded its first disc of Purcell's odes: that ground-breaking series of the complete odes (most of them at that time largely unknown) was followed by similar series of the sacred music and the secular songs, and changed the musical world's perception of Purcell. Since then there has been hardly a year in which the odes haven't appeared in TKC's concert programmes: this is music which runs through the ensemble's veins.

Spanning almost the whole of his period as an established composer, Purcell's odes show him at his finest. A glorious succession of overtures, choruses, arias and delicious ritornelli display astonishing imagination and ingenuity: yet never far beneath the surface lies the sense of melancholy, of fading glory, that is the hallmark of Purcell's greatest music.

During the pandemic lockdown of Autumn 2020, thirty-two years after their first Purcell recording, TKC returned to the studio to record three substantial odes: two written for Queen Mary, and one for King James II. An outstanding team of soloists (led by Carolyn Sampson, Iestyn Davies, Charles Daniels and Matthew Brook) included one member of the ensemble who took part in that first recording, alongside others who have been performing these works with TKC for twenty years. On the other hand, three of 2020's singers were not even born when TKC recorded that first disc. A superlative instrumental ensemble provides equally outstanding contributions.

The recording was made in the spacious surroundings of recently restored Fairfield Halls, whose warm, clear acoustic is perfect for this music. Extensive presentation includes a 48 page full colour booklet with substantial liner notes in three languages, together with sung texts and session photos.

A video documentary recorded at the sessions is on YouTube channel VivatMusicLive and at www.vivatmusic.com.

In Welcome Glorious Morn for Queen Mary in 1691 we reach a higher musical level. Both Carolyn Sampson and Matthew Brook suavely maintain their vocal lines against the ingenious but busy aria accompaniments, and Robert King draws extra sparkle from Purcell’s pairs of oboes and trumpets.

It’s hard to imagine these performances bettered. This is music Robert King and The King’s Consort have recorded before, but there’s a sheen and poise to these new accounts – crisper, softer-edged, less obviously extrovert – that brings everything into focus. It helps that King has assembled another crack team of singers who double as soloists and ensemble.