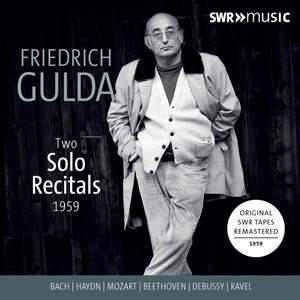 All those who experienced Gulda live reported how he radiated a very special aura, one that was markedly stronger than that conveyed by his recordings. One got the distinct impression that he was performing the music for the very first time, coaxing the notes out of a musical cosmos and making them audible on the grand piano (or the clavichord). After a final chord, Gulda would often draw a curtain on his magical, pearly tones, dispatching them with a subtle movement of the hand. Such was the case with the two Beethoven sonatas presented here. The fact that Gulda cherished Beethovens Op. 110 sonata throughout his life is by no means surprising, since Beethoven really transcends all boundaries in this piece: heterogeneous elements fuse to form an integrated whole. Its in this way that SWRs five-volume Gulda edition ends: with music that knows no boundaries, reflecting Guldas essential crossing of frontiers, ruled by a desire to let all the stars of his musical cosmos shine!