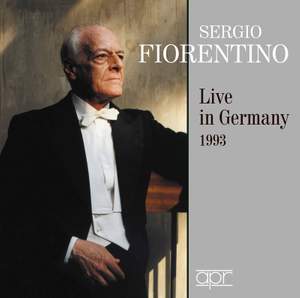 this latest issue provides ample confirmation of a stature too long unrecognised...The treacherous leaps at the close of the march from Schumann’s Fantasie hold no terrors for Fiorentino, and... — International Piano, March 2021 More…

Sergio Fiorentinos career began auspiciously with successes both in competition and on the worlds stages, including a Carnegie Hall debut in 1953, but a plane crash in 1954 affected him badly and momentum was lost. He recorded prolifically for British budget labels in the late 1950s and 1960s, but his concert profile was never fully to recover. Fiorentinos 1993 German concerts marked a return to the stage two decades after the pianists disillusionment with the performers life had led him to concentrate on teaching. These resulting live recordings, which revealed a pianist in the grand romantic tradition, were to astound the critics and relaunched Fiorentinos career in the studio and on stage for a few glorious years, until his death in 1998.

this latest issue provides ample confirmation of a stature too long unrecognised...The treacherous leaps at the close of the march from Schumann’s Fantasie hold no terrors for Fiorentino, and I doubt whether you will often hear – not even from Moiseiwitsch – a more inward or communing sense of rapture in the finale. By contrast, Fiorentino’s ear-tickling virtuosity in Gounod- Liszt and Strauss-Godowsky could make even the greatest pianist pale with envy.